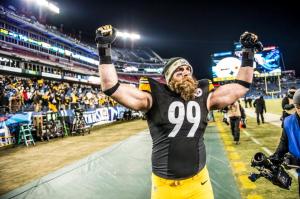 Every time a team makes an in-season roster move, there can be a sense of hope attached to it because of the addition of someone new, someone hopefully better. Other times, there’s an unpleasantness attached, some sadness even.

The Steelers made a roster move today, and it deserves to be placed in the latter category.

What was feared all along has been confirmed. Brett Keisel tore a triceps in Sunday’s game against the New Orleans Saints, and he has been placed on the injured reserve list. The injury is a significant one and will require surgery, likely to happen soon, and then a lengthy period of rehabilitation.

It’s not the end anyone wanted for Keisel this season, a year that began with him at home while the Steelers prepared for 2014 through the long process of the offseason program, OTAs, minicamp, and then the customary three-week sentence to the dormitories at Saint Vincent College. It wasn’t until Aug. 20 that Keisel signed a two-year contract to return to the only NFL team he ever has known, partly because he couldn’t imagine himself ever wearing a different uniform.

When he was brought back, Keisel was supposed to be a stop-gap, a temporary fill-in until some of the younger defensive linemen – notably rookies Stephon Tuitt and Daniel McCullers – were ready to assume the roles for which they had been drafted. But Brett Keisel had too much left in the tank, both physically and emotionally, to be relegated to a supporting role.

Maybe he only started four of the Steelers’ 12 regular season games, but that was not reflective of what he meant to this defensive line. Through 11 games, Keisel was second among defensive linemen on the team with 19 tackles, he was second among the defensive linemen with 12 quarterback pressures, and he was third on the entire team with six passes defensed. In this, his 13th NFL season, Brett Keisel quickly out-played all expectations and was a significant contributor to the defense and also one of the team’s unquestioned leaders.

Keisel’s 2014 season is over, and that’s the real significance of the announcement of this roster move. The record will show that on Monday, Dec. 1, the Pittsburgh Steelers placed Brett Keisel on injured reserve and signed veteran journeyman Clifton Geathers to take his spot on the 53-man roster.

With all due respect to Geathers, this is not an even-up move. Geathers, 6-foot-8, 325 pounds, who entered the NFL in 2010 as a sixth-round pick of the Cleveland Browns, has played in 37 career games over five seasons with six different teams. He has one career sack in the NFL after playing his college football at South Carolina.

It’s premature to write Brett Keisel’s professional obituary just yet, and everything he has contributed to the Pittsburgh Steelers demands restraint in that area, even while acknowledging the severity of a torn triceps injury sustained by a 36-year-old professional football player.

But as for the here and now, suffice it to say that the same young players Keisel was supposedly signed to hold a spot for now will be charged with replacing a guy who turned out to be more irreplaceable in 2014 than anyone imagined. The timetable for Stephon Tuitt and Daniel McCullers has been accelerated from “down the road” to the “here and now,” because Clifton Geathers joins this team as the sixth defensive lineman on a depth chart that holds only six at the position.

The real story of this roster move is not who was signed. It’s about who was lost.

Rex Ryan on the Steelers D: “There are some tough dudes over there.”