I feel blessed to able to compete on such a special night. #HereWeGo #MeanJoe – Keisel 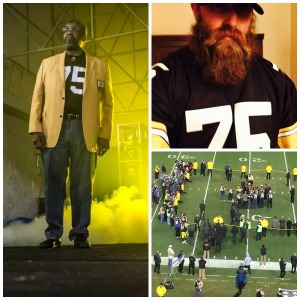 It was seconds after Steelers President Art Rooney II said the words, “I am honored to declare that No. 75 is officially retired,” that Joe Greene took off his glasses and had to wipe away a few tears. Standing around the 20-yard line, surrounded by family, former teammates, and 63,971 screaming fans, and even current Steelers Cam Heyward and Brett Keisel and Coach Mike Tomlin, Joe Greene stood alone as the man who represents what the Pittsburgh Steelers are all about.

And, from Scott Brown, ESPN.com:

Thunderous cheers reverberated around Heinz Field as Greene made his way out of the tunnel. The stadium stayed quiet through most of a video tribute to Greene shown on the Steelers’ videoboard and later chanted “De-fense!” as Steelers president Art Rooney II addressed the crowd about Greene’s impact on the only organization with six Super Bowl titles. Greene wiped tears from his eyes before accepting a No. 75 Steelers jersey from Rooney. “I’ve been blessed,” Greene said on the field. As for how he wants to be remembered, Greene said, “I want them to think that Joe Greene was part of a fantastic football team of the 1970s that probably set the tone and tempo for history for the Pittsburgh Steelers. They helped create what was the most dynamic and fantastic football city and football fans in the world.”

Epic night for an epic beard