After missing out the past two seasons, the Steelers clinched a playoff spot today by defeating the Kansas City Chiefs 20-12 at Heinz Field.

That defense came up with a turnover and a fourth-down stop to prevent two likely scores by Kansas City, which managed only four field goals on the day. They also sacked quarterback Alex Smith six times.

The Steelers’ third-straight win lifted them to 10-5 and at least a wildcard playoff spot. They will win the AFC North Division if they beat Cincinnati at Heinz Field next Sunday.

Congratulations to James Harrison for being selected as Steelers Digest Player of the Week.

What does Steeler Nation want for Christmas?

A selfie with Da Beard: √ 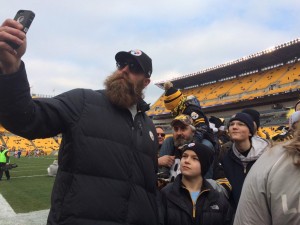