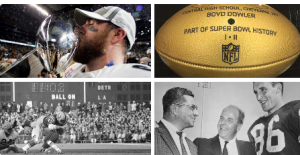 Whitworth was in-and-out of the office and listened to the message on his cell phone.

Dowler told him the NFL would be calling in about 20 minutes.

Surely enough, Whitworth soon received a call from an NFL spokesperson. They were calling to inform him about a Super Bowl Honor Roll visit as part of the NFL’s nationwide Super Bowl 50 celebration.

Whitworth hadn’t heard about the program until those two phone calls, but was excited about the news that Dowler was planning to return to Cheyenne.

A few weeks later, Dowler arrived at Cheyenne Central to address the football team, students and faculty, and present the school with a golden football commemorating his participation in the NFL’s first two Super Bowls.

This season not only marks the 50th Super Bowl, but also a celebration of every player and coach who has ever participated in football’s biggest game.

Forty-nine years ago, Wyoming had its first champion.

he NFL has requested that every head coach or player who has been on an active roster for a Super Bowl deliver a commemorative gold football to their alma mater. There are more than more than 2,000 high schools and about 3,000 players and coaches being recognized this season.

Only four are from Wyoming: Dowler, Hill, John Burrough and Brett Keisel.

While Dowler is the first Super Bowl alumnus to return to his alma mater, others are making plans to do the same.

The same weekend Dowler presented Central its gold football, Keisel made his own trip to Wyoming. The purpose of the vacation, however, was for elk hunting.

He’s in the process of setting a date to meet with his alma mater Greybull. Still, Keisel stopped by the high school to visit his nephews Zack Keisel, a freshman, and Gabe Keisel, a junior.

“That was the first time I had been on that field for a Greybull High School football game in 19 years,” he said. “That was kind of surreal to be standing there and watching those kids play out on the same field I played on and having fun with their teammates just like I did.”

The varsity team practiced before the junior varsity played and Keisel was able to spend some time with the players, while watching his nephew’s game.

He said, for lack of a better term, some of the players had “doe eyes” to talk to him. Keisel played in Super Bowl XL, XLIII and XLV with the Pittsburgh Steelers, two of which his team won.

To be at the field where his career started was special for Keisel. He said most of the reason professionals have their passion for football is because of the relationships they formed while playing in middle school and high school.

He’s hopeful to make another trip before the season ends to meet with the team and talk to them about what they’re doing, their preparation and how lucky they are to be “playing this great game they get to play every week.”

Keisel said it’s hard to believe it’s been almost two decades since he graduated from Greybull in 1997, but is glad the NFL is finding a way to give back to the roots of so many players’ careers.

“I’ll be honest, I don’t think about it too much because when I do it kind of slaps me in my face about how fortunate I’ve been,” he said. “For me, growing up in Greybull and having the people around me that I did, it really helped make me the man I am today.”

Meet and Greet with DaBeard

Keisel Claus is comin’ to town