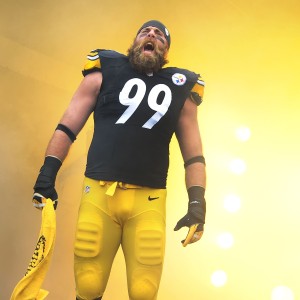 Heading to the game? Stop by and visit Brett.

He will be on Art Rooney Ave. at 6:30 p.m. tonight for the Journey to Super Bowl 50. Join him for fun contests, great prizes with Courtyard Marriott for their Suite Stadium Contest. #SuiteSB50Contest.

Don’t miss a chance to visit with Da Beard and learn about the SUITE Stadium Contest! It’s a great one!

Keisel joined the The Fan Morning Show to discuss the big game and his appearance tonight.

Listen to the interview HERE.

On the Steelers- Ravens game:

“I’ve always said it’s the greatest rivalry in the NFL.

Is it tough to watch games and not play:

It’s tough. That’s been a whole new experience. The first game was difficult. It’s getting better as each game comes and goes. Now, waking up Monday morning…I feel fresh and chipper and ready to rock and roll. It’s like I stayed at the Courtyard the night before.

On the changes Keith Butler brings:

They’ve changed things up a little bit. I think Coach Butler has done a great job. I’ve been impressed with Tuitt and Cam. Shazier, up until he got injured, was really playing tough.

On Michael Vick and his huge shoes to fill:

I have confidence in Michael. I’m excited to watch him get out there and get some action tonight. Obviously losing Ben is a big blow. You always know you have a chance to go to the Super Bowl when you have Ben.

I miss the old one. I guess you can call me old school in that way. That’s why Hines Ward was so great was because he’d come across the middle and get drilled and catch the ball and get up in smile in the defender’s face.

What if Coach Mitchell stops by tonight and says “we need you tonight”.

How many snaps can you go cold tonight:

Brett also appeared on KDKA to discuss the PRIMETIME game and to announce the Suite Stadium Contest: