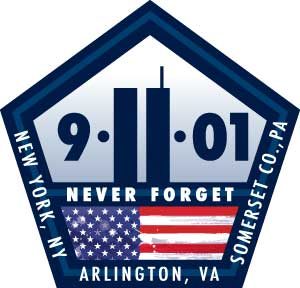 Through tragedy a bond was formed thanks to a love of country and Steelers.

It’s a day Americans will never forget, because it’s a day that changed everything. The images of Sept. 11, 2001 were seared into the memory by a nation’s worth of televisions all tuned to the pictures of the towers burning, and everyone always will remember how they first heard the news that America was under attack.

Today marks the 15th anniversary of the September 11th attacks, when two hijacked passenger jets hit the World Trade Center towers in New York City, a third was flown into the Pentagon, and a fourth that was taken over by heroic passengers and crashed in a field in Shanksville, Pa., about 80 miles from Pittsburgh, before it could reach the intended target.

Sept. 11, 2001 was a Tuesday, and the NFL regular season had begun two days earlier with a full slate of games. For the Steelers, Tuesdays during the regular season were a day off for the players, and former Steelers Brett Keisel and Aaron Smith were both at home, both asleep when the first plane hit the World Trade Center. And soon after, both received phone calls at their homes.

“I was asleep and my sister called me and told me to turn my TV on, and I couldn’t believe what I saw,” remembered Keisel. “I was nervous. You didn’t know what was going to happen next. I felt helpless. It was definitely a scary day.”

Smith felt the same emotions and it stirred something inside of him.

“I remember a lot about that day,” said Smith. “I think that day changed people’s lives, and it profoundly affected mine. I think you realize how valuable our freedoms are and how great this country is and how there are people who don’t want to see this country be the way it is. It changed the way I look at this world.

Three days later, Smith was among a group of more than 50 people from the Steelers organization, a group that included ownership, coaches, players and staff, who boarded two buses and attended a memorial service for the heroes of Flight 93, the plane that went down in Shanksville.

It was a picture-perfect night, clear and cool, calm and peaceful, the setting was classic Americana. Staged at the picturesque Somerset County courthouse, with luminarias lining the steps to honor the victims and a huge American flag as the backdrop, the families of the passengers and crew members all sat together. First responders on the scene were still there, still dealing with the tragedy.

The Steelers contingent quietly arrived shortly before it started. There was no fanfare, no special attention. They were there only to support the families and to mourn and grieve with them. As then Pennsylvania Governor Tom Ridge talked about the heroism of the passengers on Flight 93, tears filled the eyes of many who were there, football players included.

“To go to the memorial was a chilling experience,” remembered Steelers General Manager Kevin Colbert. “It was surreal.”

Emotions ran high back then, and still do.

“It was unbelievable,” said Smith. “You can’t describe it. I am at a loss for words what to say about that. Those people are true heroes in the eyes of the world. I can’t say enough about them.”

The service ended and the Steelers headed back to the buses that brought them there, while the families did the same. And through the acknowledgements from the families, amid the handshakes, tears and some smiles, a bond was formed.

Louis “Joey” Nacke was a diehard Steelers fans. He loved watching them play and no doubt was doing that when celebrating his 42nd birthday on Sept. 9, 2001. Two days later he boarded United Airlines Flight 93 in Newark bound for San Francisco. He started out that day as just another passenger making a last-minute business trip. He ended it as one of the heroes of Flight 93.

In attendance at the memorial were Nacke’s parents, Philomena and Louis, and after the service they stepped aboard the Steelers bus with Jerome Bettis and Kordell Stewart. Philomena, with tears rolling down her cheeks, walked down the aisle and started sharing the flowers given to family members with the people on the bus. She talked of Joey’s love for the Steelers and what this night would have meant to him. She was not alone in her tears. Every member of the Steelers’ organization shared her tears, shared the emotion, shared her sorrow and the sorrow of every family member impacted. But they shared something more. They shared their love. And even if for just a brief moment, there were smiles.

“For that brief moment it kind of gave her a sense of relief,” said Ken Nacke, Joey’s brother. “I remember looking around for my mom and dad and couldn’t find them, and they were on the bus with the Steelers players and coaches and owners. It was the first time I had seen my mom smile since Sept. 11.

“The support, caring and love they shared with my parents was amazing.  I felt like I was there to take care of them, but when I saw they were on the bus I didn’t need to. They were being well taken care of. My mom always asks how the team is doing, even though she doesn’t follow football. She wants to know how everyone is doing. It really is like family. I can’t even put it in to words. It brings a tear to my eye knowing something that was very important to my brother continues to grow today.”

Teammates, family, friends and fans show up to support DaBeard

Happy Mother’s Day to ALL!