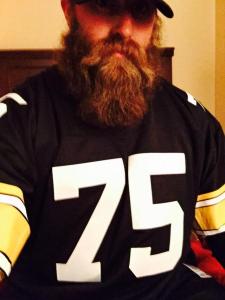 One to remember. Thank you Joe Green for your influence on my career and for building the Steelers into what they are. I feel blessed to able to compete on such a special night. .#triplestack #hotcakes– Keisel, from his post game interview.

The Steelers defeated the Ravens by a score of 43-23 . They are 5-3 after three straight wins.

The Steelers are 6-3 and as hot as any team in the NFL after overcoming an early 7-0 deficit to bury the Ravens. The Steelers are just a half-game out of first place in the AFC North, and by averting a season sweep at the hands of the Ravens, they didn’t put themselves in a bad spot when it comes to tiebreakers within the division. Quarterback Ben Roethlisberger is quite simply playing out of his mind right now. The 11th-year veteran has thrown 12 touchdown passes with no interceptions in leading the Steelers to wins over the Indianapolis Colts and Ravens. The Steelers didn’t manage a touchdown in a 26-6 loss to Baltimore on Sept. 11, but Roethlisberger toyed with a depleted secondary in throwing six scoring passes for the second consecutive game. His 12 touchdown passes in two games are an NFL record.

The Steelers’ defense honored Joe Greene, whose number was officially retired at halftime, by battering, bruising and ultimately beating Joe Flacco and the Ravens. Flacco usually plays well at Heinz Field, but the Steelers sacked him four times and intercepted the Ravens quarterback when it was a 7-7 game. The first turnover of the game — a fumble outside linebacker Arthur Moats forced and cornerback Brice McCain recovered — set up the Steelers’ first touchdown and got the offense going after a slow start. The defense also smothered the Ravens’ running game and allowed just 63 yards and 3.5 yards per carry.

James Harrison, who retired less than two months ago, dominated the Ravens with two sacks and three quarterback pressures. Harrison staged his national coming out party against the visiting Ravens in 2007. It looks likes prime-time games at Heinz Field against the Steelers’ chief rival still agree with Harrison, who also had seven tackles.

From the ESPN Sunday Night Crew:

Brett Keisel doing the dirty work and letting James Harrison do some damage!

It was a fun game today.

Tonight was special for a lot of reasons. Because we played well, because we had a good win and because Joe got to go out the right way.

He picked this game. He picked the Ravens game to have this celebration for him. It was only right, you know..get a big win and he goes out on top.

Tonight was good. We played tough.

We will have photos and more news later today, so stop back! Also, we will be announcing a Keisel autograph appearance today!