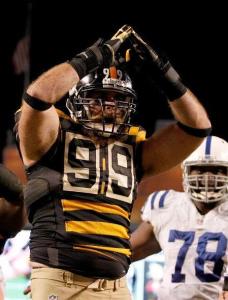 The Steelers wore their Throwback jerseys tonight, which many fans refer to as their “bumble bee” uniforms. Maybe they’re right because the Steelers put the sting on the Colts for virtually the entire game.

The defense came out strong and put pressure on Colts QB Andrew Luck from the start.

They also caused turnovers, which were key.

William Gay intercepted Luck and ran it back for a touchdown, and Antwon Blake iced the win with another interception late in the fourth quarter.

99 also put a lot of pressure on Luck!

The offense was on fire from the start. Ben’s offensive line provided the best protection we’ve seen in a long time. This allowed Ben to “Be Ben”.

Roethlisberger completed 40-of-49 for 522 yards, with six touchdowns and no interceptions to finish with a rating of 150.6. He became the first player in NFL history to pass for over 500 yards twice in a career; he became one of four quarterbacks in NFL history to win his 100th game within 150 career starts.

Brett was so impressed with his friend that he made this request:

Keisel joked after the game that he wants Ben’s game jersey after such a huge performance. Keisel very happy for his teammate and friend.- Missi Matthews.

Has Brett ever seen Ben in the zone like he was today:

The Steelers made it closer than it should have been after losing a fumble on consecutive possessions in the second half. But they still put together their most impressive performance of the season in winning the second of back-to-back games for the first time this season. They also notched the signature victory that eluded them and arrive at the midway point of the season 5-3 and just a half-game behind the Cincinnati Bengals in the AFC North.

Read more on the game HERE.

View photos from the game HERE.

We will have MUCH more news tomorrow!