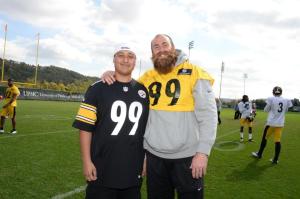 For 16-year old Hector Castillo, Friday was the best day of his life thanks to Brett Keisel and the Steelers.

Practice had ended just a few minutes earlier, and 16-year old Hector Castillo stood on the field in amazement, watching as Steelers’ players came over to him, shaking his hand, signing autographs and taking pictures.

And then the moment he wished for happened, the moment that you can’t even begin to explain how happy he was, how much joy it brought, without seeing it. Brett Keisel, the burly defensive end, walked over to Castillo and just hugged him. Saying it was special, that doesn’t come close to giving the moment justice.

Castillo was at practice as a guest of the Steelers through the Make-A-Wish Foundation. He has battled Ewing’s sarcoma, having part of his right leg amputated because of the disease, but in November will be one year free from it. His wish was to come to a Steelers game, which he will do Monday night against the Texans, but he got more than he bargained for, seeing practice on Friday and meeting all of the players and coaches, including Keisel who is an inspiration to him.

“I was so nervous. It’s so exciting,” said Castillo, who was there with his family from Pasadena, Texas. “This is really special. I am just so nervous about it. This team is the most important team in the NFL to me. It’s where I got my inspiration. Brett Keisel inspired me to play football. When I tried out for football I tried his position and got it. I got his number. This is just really amazing.”

It was just exciting for Castillo, but also for Keisel who was touched by the emotional meeting and learning he inspired Castillo, who isn’t able to play football any longer.

“I don’t see myself in that light,” said Keisel. “To have a kid like that who has been through a lot…he told me today was the best day of his life. That really touched me. It shows you the positive effect you can have on somebody. You just strive to be a good person, strive to do good every day and you never know who it might inspire.”

The Bus is rollin’ on to Canton!