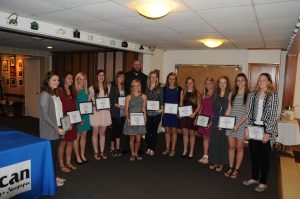 By all accounts, the inaugural Daily American Sports Achievement Awards Banquet was a huge success.

The event was organized and sponsored by the Daily American, along with Somerset Trust Company and Penn Highlands Community College.

Awards were presented to one male and one female scholar athlete chosen by each school in the county and the top male athlete, top female athlete, top coach and top team, which were nominated and voted upon by Daily American readers.

“I actually don’t think the event could have gone much better,” said Daily American General Manager Becky Flyte. “Brett Keisel was an excellent speaker. I think the audience really enjoyed his comments. It was very inspirational for our student-athletes. It was a great venue to honor our student-athletes who have dedicated so much of their time to their studies and their athletics. We were very pleased. We had a lot of participation from our readers, both in the nomination process and the voting process as well.” 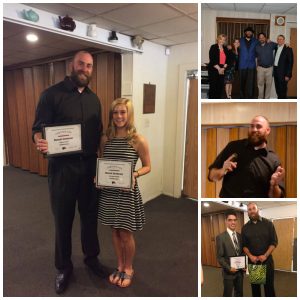 Keisel, a 13-year NFL veteran and two-time Super Bowl champion, talked about his time with the Steelers and growing up in a small town in Wyoming, much like the small communities that make up Somerset County.

“I truly have come to love this area,” Keisel said. “It reminds me so much of back home. It’s beautiful out here (in Somerset County). I am incredibly honored and humbled that they chose me to come and speak to you today.”

Keisel emphasized the importance of playing multiple sports while in school despite a time where specialization is becoming more and more popular.

Keisel passed around one of his Super Bowl rings for the student-athletes to see.

“DO NOT LOSE THIS!,” Keisel joked as he gave the ring to the young men and women, who marveled at his prized possession.

Keisel, who spoke for about 20 minutes, also posed for photos and helped hand out awards.

Hannah Sembower, a soccer standout at Somerset Area High School, was named the top female athlete. She beat out Courtney Schrock of North Star and Beth Felix of Johnstown Christian School in the voting. 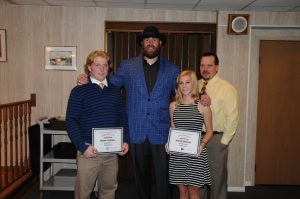 Berlin’s Braden Fochtman, one of the region’s top running backs and a state placewinner in wrestling, earned the top male athlete award. He prevailed in the voting ahead of Somerset’s Dylan Barnes and Jacob Heiple.

“It’s definitely an honor,” Fochtman said. “Being here today and being able to be a part of this was awesome. To see Brett Keisel and knowing that he came from a very small (high) school similar to where I go, it definitely sparks some dreams that I have. I want to thank everyone who voted for me and it’s truly an honor that you guys think I’m the best athlete in this county.”

The Berlin football team also garnered the top team award. The other nominees were the Somerset boys soccer team and the North Star girls basketball team.

“This was a great event,” Paul said. “We want to thank the Daily American so much for coming up with this idea. It’s great to see teams and athletes get honored, but especially the student-athletes, academically. Brett Keisel’s speech today hit the nail on the head for every young athlete in here about facing adversity and chasing your dreams. It’s a message even us as adults can use. It was a very-well put together event and we very much appreciate it.” 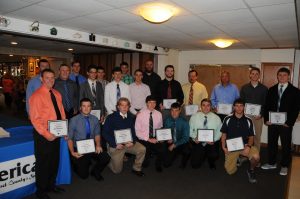 The scholar-athletes from each school were:

Listen to part of Brett’s speech.

Congratulations to all the scholar-athletes!

Thank you to Daily American!