Garth Brooks and his wife Tricia Yearwood are in Pittsburgh for a series of concerts. In between concerts, Garth took the time to host his Teammates ProCamp.

And, to top it all off…today is Garth’s birthday!!!

He was joined by Brett, Ben Roethlisberger, Heath Miller, Shaun Suisham and Greg Warren, just to name a few. 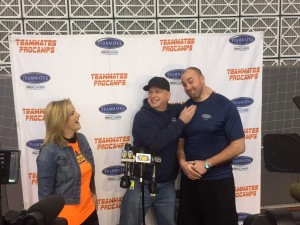 About 100 kids from the Boys and Girls Club got a chance to run drills with Ben Roethlisberger and Brett Keisel.

“Dreaming of maybe playing in the big stage someday and you run down and Ben’s throwing you that ball and you’re like man, this is the greatest ever. It’s incredible that he does this for kids.”– Keisel

Watch a quick video from the Steelers.

Learn much more about the Garth Brooks Teammates for Kids Foundation and the amazing work they do HERE.

We’re the city of champions, baby!

“I’m back in the saddle again…”