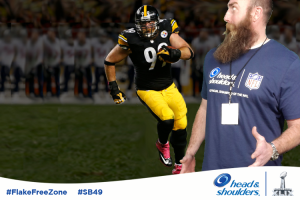 Excited to team up with Head & Shoulders again as their “Official Hair Correspondent” at the Super Bowl. You down with OHC? Yeah you know me. — Da Beard

Can’t wait to see what kind of hairy situations our Hair Correspondent will get into this year.- Head & Shoulders

Brett (and Da Beard) is back again as the Head & Shoulders Hair Correspondent. He had a very busy first day at SB XLIX Media Week greeting fans, providing in depth coverage and he even found time to give away some Super Bowl tickets!

Missed his appearances? No worries, we have you covered.

Da Beard comments on his role with Pittsburgh, his future, what Dick LeBeau has meant to the team, NFL players’ sentiments about the Patriots and Deflategate.

Head and Shoulders keep you with a healthy scalp. There’s a lot of great things about it. I use it everyday on my beard.

Coach LeBeau means to much to me and I know he means so much to so many of my teammates. We are the men we are off the field because of his great influence.

I just think they’re rollin’ now. I am a big believer in momentum… in catching that wave and riding it.

What has Brett purchased recently that made his wife mad? Listen to the interview to find out…

I’m so grateful that I got to be a part of Coach LeBeau’s brilliance for as long as we did. — Keisel

Brett also was able to give away Super Bowl XLIX tickets:

How cool! Got to give SB tickets to two Steelers fans in the #FlakeFreeZone at NFL Experience. Thanks Head & Shoulders!

A Public Act of Grooming