Thank you to the Seahawks and Patriots for having fun with Head & Shoulders and myself! — Da Beard 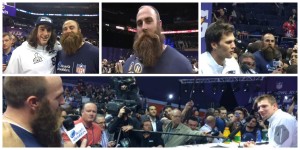 To my Pittsburgh Steeler fans…I love ya, it’s been awesome playing for the Steelers. Hopefully we’ll be back next year.

Watch his quick interview with Damany Lewis, WPXI as he discusses what Media Day is like for players and for him as a Head & Shoulders Hair Correspondent HERE.

Seahawks DE Michael Bennett: “What do you feed that beard, man?”

Brett Keisel to Seahawk QB, Russell Wilson: “Growing your beard out for the game?”

Russell: “Ya, and I see you got a beard to must be rooting for the Hawks.”

Brett Keisel asking Russell Wilson how he keeps his beard so nice might be the best thing I’ve heard in awhile. — McCabe

My twitter feed is telling that Brett Keisel and his beard are the most interesting things re: Super Bowl. As a BYU fan, this pleases me. — Nate Watson

Keisel and Da Beard were the BEST ones there today. Most entertaining by far! — Steve Lindon

I’m trying to focus on Brady during this interview but I cant take my eyes off Brett Keisel’s beard! — Shane O’

Thank you to Mr. Keisel for taking time to meet and greet with fans. One of the only athletes who went out of his way to spend time with fans the last two days. Class act! — Sharon Neery 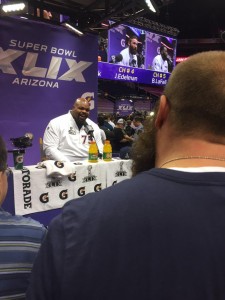 Love how this guy plays the game. Your scalp is healthy too, look at that shine. Must be Head & Shoulders! — Keisel

Catchin’ up with Da Beard

Rally ‘Round The Family