It was just a casual one, the type former Steelers Chairman Dan Rooney often had with his players. It took place one day during the 2008 preseason, and it’s forever embedded in Farrior’s memory.

“Our schedule was predicted one of the hardest that year,” recalled Farrior. “I remember Mr. Rooney telling us they gave us the hardest schedule this year. Looks like we are going to have to win the Super Bowl.

“I will always remember him saying that.”

That 2008 team did just as he had said. They won the Super Bowl XLIII.

It wasn’t just a gathering of former teammates on Saturday night when members of the Super Bowl XIII and Super Bowl XLIII teams gathered at Heinz Field.

It was a family reunion.

“That’s what it’s like. It’s like a family reunion,” said Steelers President Art Rooney II. “The guys spent a lot of time together when they were on the team. Then everybody goes their own separate ways and they don’t get to see each other. It’s special when they can come back together.

“I think when a team wins a championship there is a special bond that gets formed there. Whenever they get back together, it’s like they never left each other. It’s great how that happens.”

And it was a different reunion, with players from both teams mingling, getting to know each other, and appreciating each other.

“I love seeing all of the guys. It seems like we pick up right where we left off,” said Farrior. “A lot of the guys we communicate, but seeing them, being around them again, it gives us that warm feeling again. It was a family. It was like that the entire time I was with the Steelers. The Rooney family set the standards and it trickled down from there.

And, thanks to Teresa Varley for these great photos! 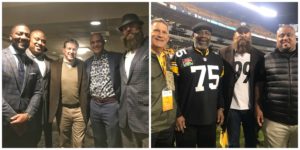