Scott Brown, ESPN.com, had a chance to chat a bit with Keisel regarding his future.

Keisel isn’t in any rush to make a decision about his future and why should he be?

The 13th-year veteran has plenty of time to weigh his options and decide whether he wants to keep playing. Keisel is signed through 2015 but the Steelers may release “Da Beard” after this season given his advanced football age of 36 and the reality that he has to come back from a serious injury.

Here is a serious question if Keisel does intend to keep playing: If the Steelers have to choose between keeping him or Cam Thomas is it really even a choice? Keisel had 22 tackles, 12 quarterback pressures, a sack and an interception in 12 games. Thomas, who also only has one year left on his contract, has 19 tackles, five quarterback pressures and a half-a-sack in 13 games.

The biggest consideration for Keisel as far as his football future is whether he wants to put himself through the grueling rehabilitation that will be required for him to return. Keisel is looking at a four-month process and that is after he is strong enough to start working out fully.

And there are no guarantees even if he makes it back that the Steelers — or any other team — will make room for him. Keisel has accomplished so much in the NFL and the former seventh-round draft pick has nothing left to prove. But Keisel is also as competitive as they come and if he feels like he can still play in this league that may drive him to come back so he can try to finish on his terms.

You’ll also want to check out this great article from Rebecca Rollett, Behind the Steel Curtain:

Rebecca had the opportunity to attend the 65 Roses Sports Auction, hosted by Brett and Cam Heyward. Her friend was a contestant in the beard contest, judged by Keisel. 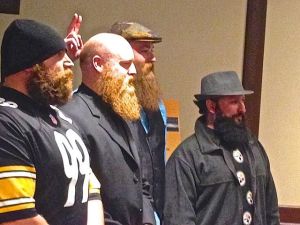 The gentlemen filed onstage and Brett Keisel appeared to be overcome with emotion at the sight of so much bearded beauty. He then took the microphone and talked about how much his work with the Cystic Fibrosis Foundation had meant to him over the years, announcing his concern that this tradition be carried on. Therefore he had asked Cameron Heyward to be the co-chair with him this year, in the expectation Heyward would carry on the tradition in the years to come. As was noted by more than one person, Heyward’s beard has a long way to go, but he asked everyone to be patient with him.

Heyward then asked for the microphone and thanked everyone for the opportunity to be involved. I have long considered him to be a sensible and solid young man, and clearly Brett Keisel views him as his heir-apparent in more than one way. It was very moving to see a well-loved and respected veteran visibly passing the torch, and I look for great things from Heyward, both on the field and on the chin, in years to come.

But as I noted in the title, what the event really did was to get me thinking about how lucky we are as a fan base. I know that there are great guys on every team in the NFL and that they perform a lot of community service. But I do think something which is fairly unique to this franchise is the feeling that players are expected to not only ‘give back’ to the community but to each other.

Keisel is one of the earliest players I learned to recognize when I first became a fan, and he’s one who’s going to remain in my heart long after he officially hangs up his cleats. Part of the joy of rooting for this franchise is the opportunity to be inspired by men like him. May the generous spirit of “da Beard” live on in future generations of Steelers.

There is much more in Rebecca’s article HERE. Definitely worth the click to read it. Thanks Rebecca!

“You want to be a consistent team”