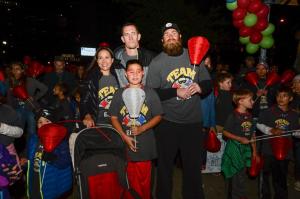 For former Steelers defensive end Aaron Smith, the Light the Night Walk is a family celebration.

“I think that is the thing that is unique about this organization. It’s a family organization. When you work here you are part of the family, but when you leave they don’t forget about you. They still hold on to you and still bring you into your arms and rally around you and support you.”- Aaron Smith.

On a crisp fall evening, with Heinz Field as the backdrop and the City of Pittsburgh skyline lit up across a glistening river, it was a perfect setting for a celebration of life.

Because, when you have been through the battle that former Steelers defensive end Aaron Smith has with his son Elijah, life is a celebration.

In October of 2008 the Smith family was rocked by the news that young Elijah had leukemia. It shook them, but it never broke them. There were tears, there was emotion, but there was strength.

Six years later, 10-year old Elijah is stronger than ever, proudly taking part in the Leukemia Lymphoma Society Light the Night Walk as a strong survivor.

Six years later, 10-year old Elijah is stronger than ever, proudly taking part in the Leukemia Lymphoma Society Light the Night Walk as a strong survivor.“He is doing fantastic,” said Smith. “His memories of what happened are so vague. He has nothing but happy memories. He is playing soccer, flag football. To watch him is such a blessing.

“I am not one to cry, but there are some monumental moments in his life and it almost makes me cry. You realize how fragile life is. When you go through something like this as a parent you count your blessing and appreciate those moments even more.”

This is the sixth year that the Smith family, along with some of his former teammates including Brett Keisel, Bruce Gradkowski, Cam Heyward, Steve McLendon, Cam Thomas and Nick Williams, participated in the walk as a part of Team Elijah, all wearing shirts he helped design. It’s not to draw attention to themselves, but attention to a disease that can be battled victoriously.

View a few photos of the Keisel’s at the walk HERE and HERE.