Brett and his teammates from the amazing SB Xl season got together tonight for the Alumni Weekend Dinner. 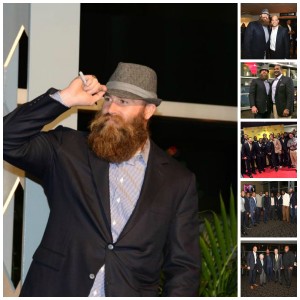 We were all so close. That is why we made it to the Super Bowl. When it got to crunch time, everybody responded and put our minds together that we could do something and we went and did something that had never been done in the history of the NFL, winning three games on the road to get there. To be a part of that whole thing was incredible. – Brett 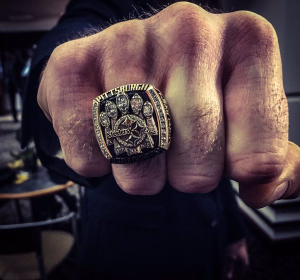 Keisel with “One for the Thumb”…

The friendships were renewed instantly, and the memories and stories flowed easily. And the reason was simple. These were more than former teammates gathering together. They were family, a group that bonded so well it helped lead them to winning Super Bowl XL.

“We were all so close. That is why we made it to the Super Bowl,” said defensive end Brett Keisel. “When it got to crunch time, everybody responded and put our minds together that we could do something and we went and did something that had never been done in the history of the NFL, winning three games on the road to get there. To be a part of that whole thing was incredible.”

The Steelers are celebrating the 10th anniversary of Super Bowl XL this weekend, and it kicked off at Heinz Field with the annual dinner, a chance for the players to share stories of the season that culminated in a win over the Seattle Seahawks at Ford Field.

“No question it was a special group,” said linebacker James Farrior. “Whenever you do something special with a group like that, the guys you accomplished something so special with, you always have a bond that will never go away. We will carry that on for the rest of our lives.

“Having this 10 year reunion is special. This is a time to look back and reflect on that one specific season when we had one team, one group of guys that you can never duplicate and what we went through to win that championship. It’s a fun time to reminisce about all of it.”

Many of the players had the opportunity to gather at Jerome Bettis’ Hall of Fame Enshrinement this summer, sharing stories then. But this is the perfect opportunity to talk about the journey that led them to Super Bowl glory.

“Just seeing the guys, you walk in and see some of the guys you haven’t seen in years,” said Bettis. “To get the opportunity to spend time with them is special. To see their families, how they have developed as men, it’s great to see.

“It’s been a whirlwind year for me. It’s been a magical year and it’s not stopping. Seeing all of these guys here, it makes it really special. We are reminded of something we did that was really special. To be able to become champions together was special.” 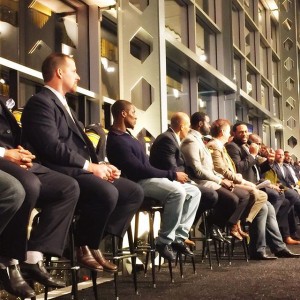 So much love on this stage! We might not have seen each other for ten years, but that friendship and bond is still there!
What happens when Da Beard and Big Snack get together? 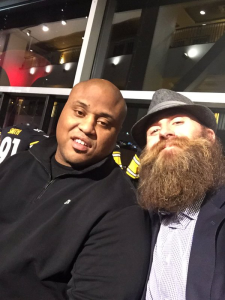 SELFIES, of course!
This handsome guy and his awesome mom traveled all the way from NC to attend the dinner and meet up with their favorite player! 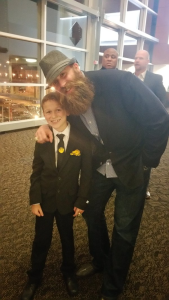 Brett wanted to make sure to get a photo with Burke and his DaBeard-attire!
View many more photos HERE and HERE!
Tags:alumni weekend dinner, teresa varley