So much fun being back at LES again after 14 years. Way to fight till the end @BYUfootball! #GoCougs! — Brett 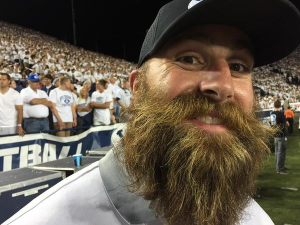 Tanner Mangum, the kid who came in for BYU quarterback Taysom Hill and had turned into a star overnight with one Hail Mary against Nebraska, is now on his way to becoming a folk hero with his second Hail Mary in a second consecutive weekend.

His deep bomb on fourth-and-7 with a subsequent PAT gave BYU a four-point margin over No. 20 Boise State, and Kai Nacua’s 50-yard pick-six on the next Broncos’ offensive play sealed the deal for BYU, 35-24.

Brett attended the game where he spoke to the Cougar Club before the game and he held an autograph signing during a pre-game tailgate. Fans were lined up for miles! He also was the Alumni Flag Bearer. 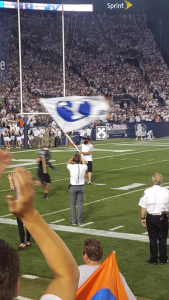 BYU fans were thrilled by this:

Brett Keisel is a hero. Just took the Alumni flag, posted himself right in front of the Boise tunnel and screamed at ’em coming out. #Legend – P.Norton

Getting the big ‘W’: 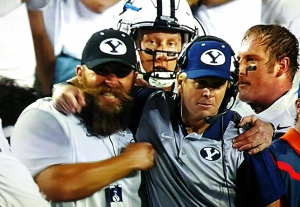 Before you ask…yep, we have lots of great photos! They will be posted soon.

Keisel Klaus is coming to…